Today’s caveat is dedicated to all the h8trs out there.  H8trs gonna h8t (said in my most thuggy ~thuggiest??~ voice possible).

Today dawned bright and early.  Actually it started prior to dawn for me as I arrived to the barn in the dark to hack DC in the ring before the start of the show day.  This is a particularly painful part of owning a hunter.  Almost every single show morning I join 20 or so of my fellow hunter riders to hack in the ring partially to express some energy and partially to get then accustomed to the arena we will be showing in later that day.

At WEF, since we are stabled off grounds, this endeavor is even more painful as the walk to the ring is a minimum 20 minutes.  No pain no gain, or some ridiculous saying like that.  As the sun rose during our walk, the show grounds were foggy and the result was a beautiful view of many horses hacking in the various rings in a mist for a memorable experience.  I really wished I had my phone to snap a picture of the moment.  I am happy to report that DC has conquered his fear of the dreaded parking sign and walked passed it with an attitude of ‘you don’t know me fool.’  We’ve come a long way.

He hacked beautifully in the morning, really soft through the jaw, listening, and seemingly with his game face on.  We walked back to the barn (25 minutes later….) and the braiders were there waiting to make him pretty.  This was the result. 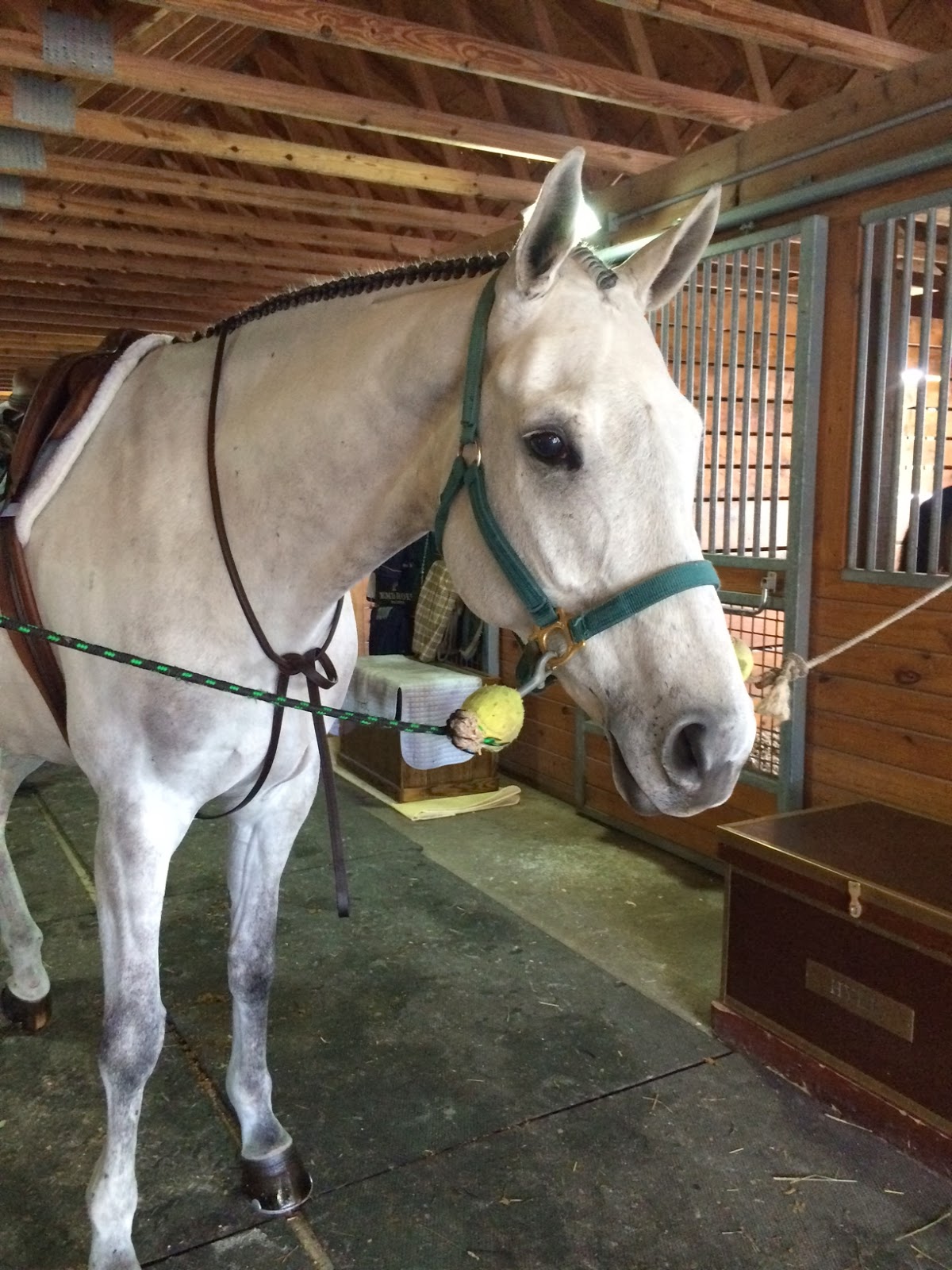 Since I didn’t go until later in the afternoon, I headed back over to the show grounds to do a little shopping, and watch.  I am proud to once again announce that I did not buy anything.  Not even one single item.  This could have to do with the fact that 90% of the shops were still closed, however that is not the point; my restraint knows no bounds.  I hung out at the show for a while watching, and cheering on the other riders from my barn, then headed back to get on DC.

To say I was nervous is liken to saying there are only a few places to shop at WEF.  Butterflies abound in my stomach, and I was essentially terrified.  In the barn where Woodhill is stabled there are two other barns co-located with us.  One of the barns has a lovely working student who is simply as nice as possible.  When she saw me getting ready to get on, she said “just remember, it feels twice as good when you work twice as hard to get there.”  In my case it might be 4 or 5 times as hard, but wiser words were not spoken on that day.

Originally, the 3’3 younger A/Os were scheduled to go in ring 6 with the adults.  There was an ariat medal that I planned to use as a warm up and to get my jitters out.  It was the perfect set up.  A 3’ class that I didn’t care about to start, then only to move up to the 3’3 later in the day.  This perfect plan was foiled by show management when they moved us into the ‘Grand Hunter’ arena.  Most people, I’m sure, were thrilled with getting to ride in Grand Hunter instead of Ring 6.  I am not most people.  Gone was my nice warm up class, and my simpler jumps.  Instead I had just two hunter rounds, and jumps that were definitely of the non-simple variety.

If I had to describe the jumps in Grand Hunter, I’d say it looks like someone got all of the Astroturf from the Astrodome and proceeded to coat every surface possible with it.  There were no flowers, just a few boxes with fake leaves in them.  Perhaps they were going for a fall theme.  However, when I say Astroturf was covering everything, I mean it.  We had Astroturf walls, Astroturf boxes, Astroturf ground lines, Astroturf toppers, and even Astroturf poles.  It was a very green ring.  The color, not the ecological viewpoint.

Despite my jitters, we warmed up quite nicely and he felt really good.  My first course was a regular hunter.  Right away I could tell DC was very impressed with these jumps.  He’s done 3’3 at two previous shows, but other shows are not WEF.  The way these jumps are made, the walls of Astroturf are built at a full 3’ with an (Astroturf) pole one hole higher than the walls themselves to make the 3’3.  Visually this is much more solid and intimidating than a 2’6 wall with a bunch of poles on top to build up to 3’3.  He was jumping HIGH and TIGHT.  Although this would make for some beautiful photos (if a photographer had been there, biggest show of the year and a photographer that doesn’t even cover every ring, not bitter at all), it does not make for the smoothest of rounds.  He was so lofty with his jump that he wasn’t jumping into the lines well leaving us having to move up for the out, and a gap at the end.  It actually wasn’t horrible, or embarrassing, and we scored a 70.

Our second course was the handy hunter.  It was improved from the first course with some really excellent jumps.  That said, I forgot two of my “handy” turns at the end of the course.  This was just after we did a loop to an oxer with one of those astroturf poles on the back side. “OH MY GOD THE POLE IS FUZZY.”  I swear over that jump he launched up over the standard.  I would give anything to have a picture of it, I’ve never felt any horse jump higher or crack his back harder than that moment on that oxer.  It distracted me and all of my handiness went by the wayside.  We scored a 76.  Most exciting of all, is that 76 was good enough to get us in the ribbons! 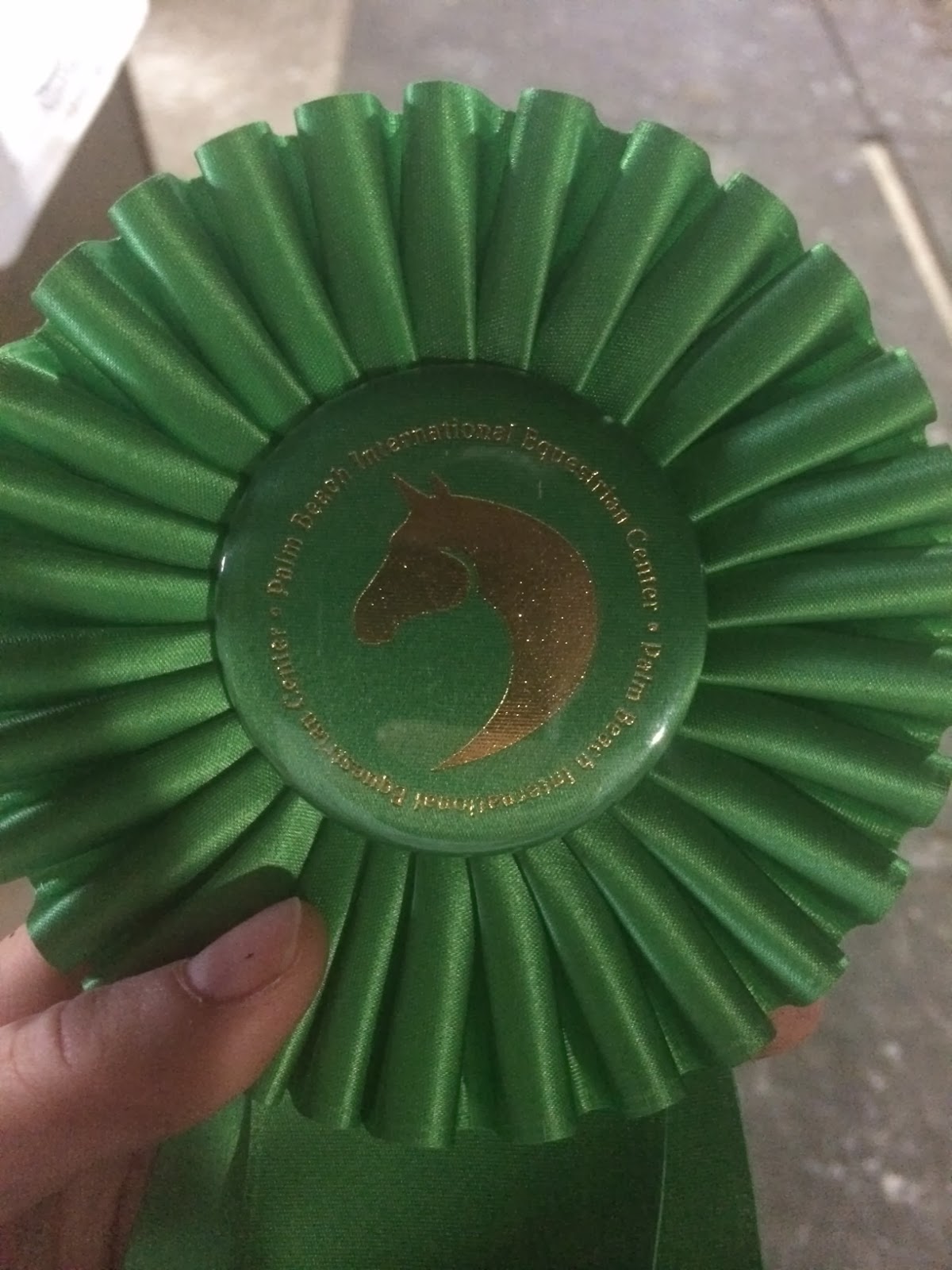 Ok it was only a 6th, but a 6th that I was damned proud of on a horse that is likely younger and most definitely greener than the rest of the group, and on my first day!  Suzanne made it just in time to watch me jog.  I’m sure she was amazed and enthralled by the beauty and grace of my jogging abilities; I really can jog like no other.  I was in a lineup of me, and 9 other bays (they jog through 10th).  DC definitely stood out in that group, if for nothing else being so gray and so not bay.

My goal was to not be last, and I was not last.  Goal achieved.

Following our jog, we walked back to the barn where I proceeded to feed him as many treats as possible.  He was so brave, and so handy, and really just so much better than I could have ever asked from him.  We were done for the day, but I wanted to hang around Wellington for the Charity relay race and Hunter Hayes concert, I ran a few errands including boring grocery store and much less boring shopping (I cannot claim to have not bought anything on this round).  I also returned the coat I had bought at the consignment store previously.  A raised eyebrow from Matt and a comment of “maybe if you replaced the buttons” was enough to send it packing.

The following is a summary of how a series of bad decisions lead to more bad decisions and hilarity of stress in my life.  I headed back to the show grounds for the evening activities only to realize that I had accidentally given Suzanne’s ticket to another girl by accident!  So I ran over to their hotel to pick up her ticket.  I then (once again) headed back to the show grounds and went to park at my barn.  I pulled into my barn which has a U driveway with the plan to follow the U to the parking.  Except there was a car parked in the middle of the road, and nowhere for me to turn around. If you can imagine what this looks like in an F250 instead of a golf cart, that’s a good representation of what ensued.  I finally got parked and started to walk to the show grounds.  A golf cart went WHIZZING by me, then slammed on their breaks, hit reverse, and backed up back to me in a somewhat crazy manner.  “You want a ride?” yelled out the cutest Irish accent possible.  UH yes, yes I did.  So I climbed into a golf cart with a young Irish couple and an insane golf cart driver.  10 death defying minutes later I had finally arrived at the international ring, tickets in hand!

Suzanne had scored some VIP seats with a friend of hers, and we got to watch the second half of the Charity relay races. 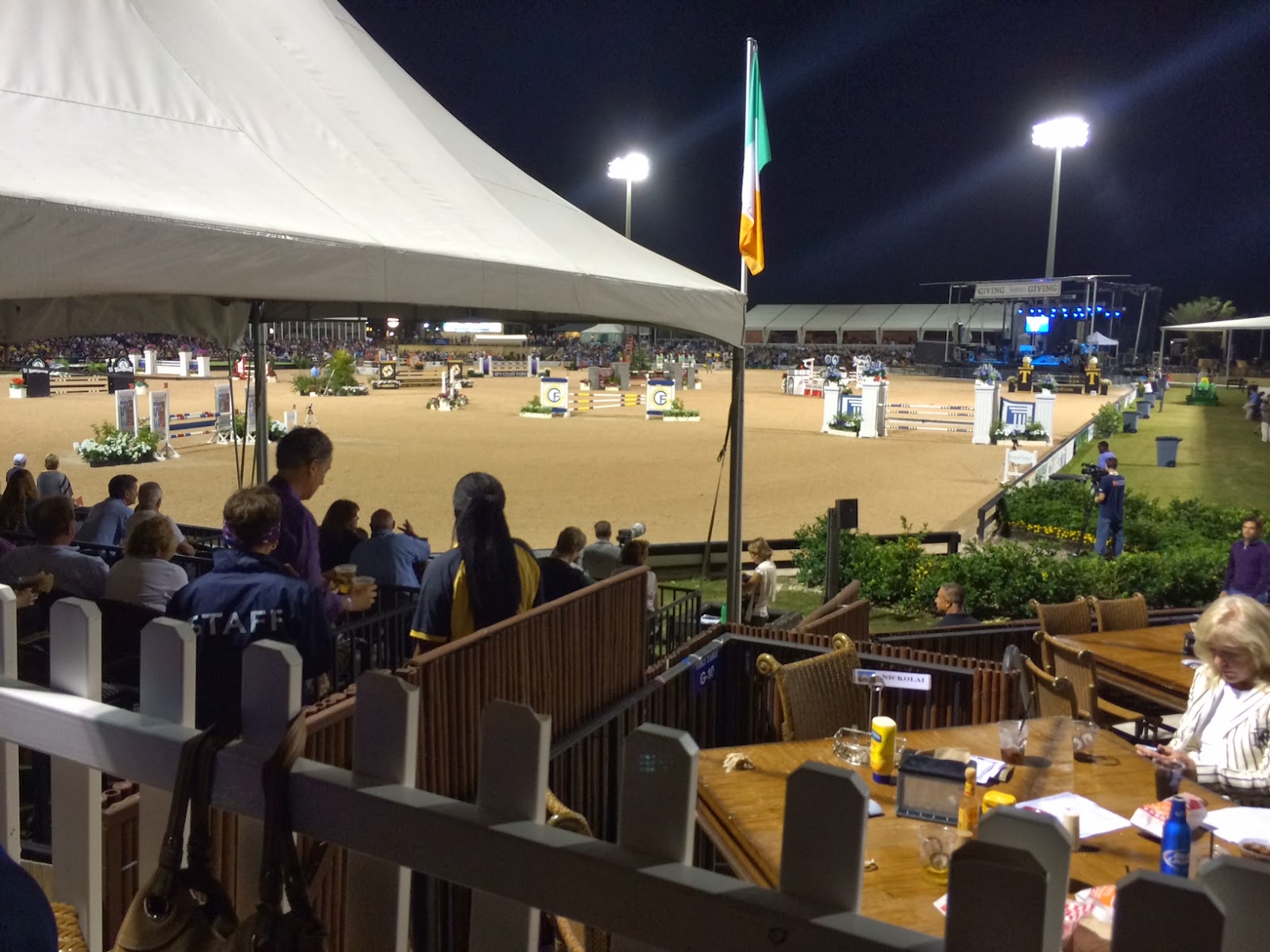 The way it works is that there are three riders who all entered the ring at the same time.  They then proceed to jump a course of jumps in a relay style, the first jumping 1.10 meters, the second jumping 1.20 meters and the third 1.30 meters.  The first two riders must be Juniors or Ammys, the third is a pro.  I have to tell you, it was the zaniest thing I’ve ever seen on a horse.  Most had costumes, glitter, feathers, and streamers.  I saw horses swimming through jumps, a horse run through a jump backwards, much rearing and bucking, a rider break a rein, and a girl whose horse took off with her and almost jumped into the stands.  It was close.  It was insane and incredibly competitive.  Especially the Irish and Columbians, they really went for broke.  The winning team’s charity got $150,000 in donation.

After it was complete, they cleared the jumps and covered the arena with a tarp similar to what you’d see at a baseball field.  Hunter Hayes came on stage and all the screaming juniors went WILD, except when he slipped and fell and ate it in front of everyone, that was just funny. 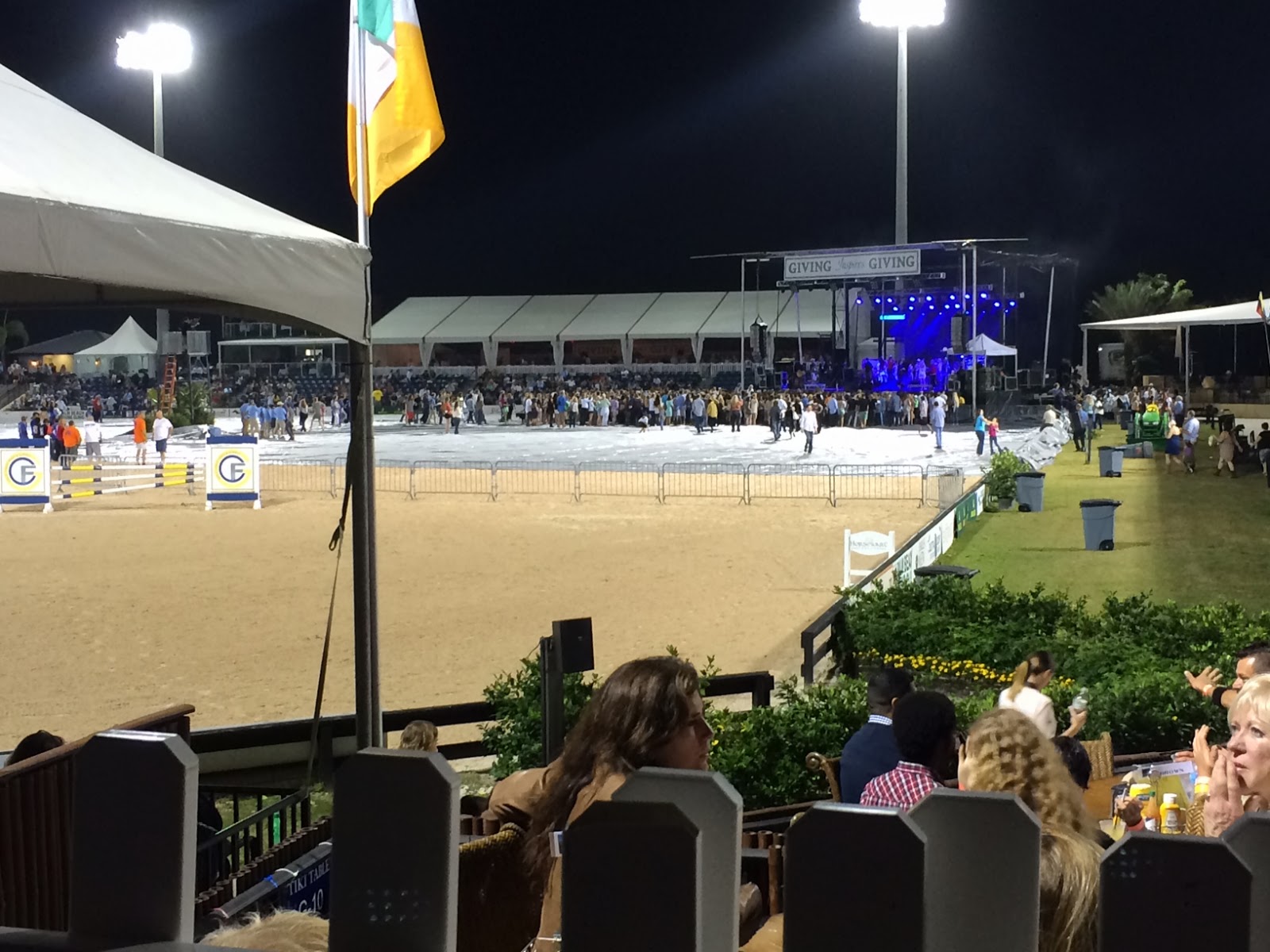 I listened to a few songs and then headed back to my truck and thus home.  The 5am wakeup call followed by my long and stressful day made 10pm seem like it was as late as possible.
Posted by Anna at 8:45 AM