Today’s caveat is dedicated to my one follower, Melissa.  One is much better than none, and thanks for following!

When I woke up on Day 3, I was armed with a full 8 hours of sleep, and a greatly reduced amount of coughing.  The bits of lung were safe for the time being it seemed.  On top of that, I was fully oxygenated and ready to take on all that Wellington had to offer.

Then I looked outside.

I knew that rain was predicted, and I knew rain was likely.  But the reality of rain did not set in until I saw it with my very own eyes.  I really wanted to believe that sunny and 85 was the only option here in horse heaven.  But I have to say, if it was going to rain, today was a great day to get that over with.  Work really was trying to get in the way of riding, and I spent the majority of the daylight hours in front of a computer.  Not to make the computer feel badly about itself or left out of the fun….. 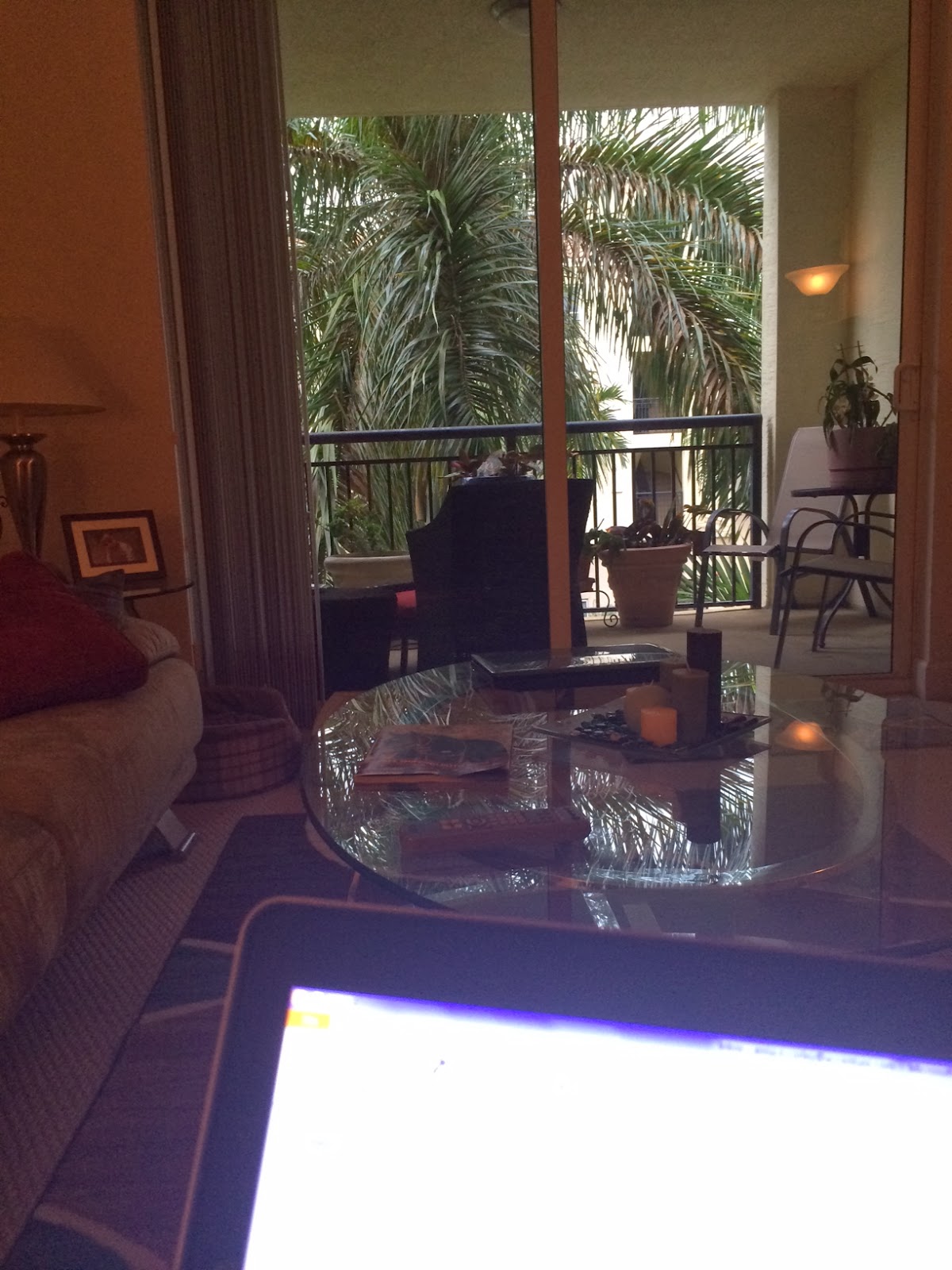 Thankfully Trout was here to see me through. 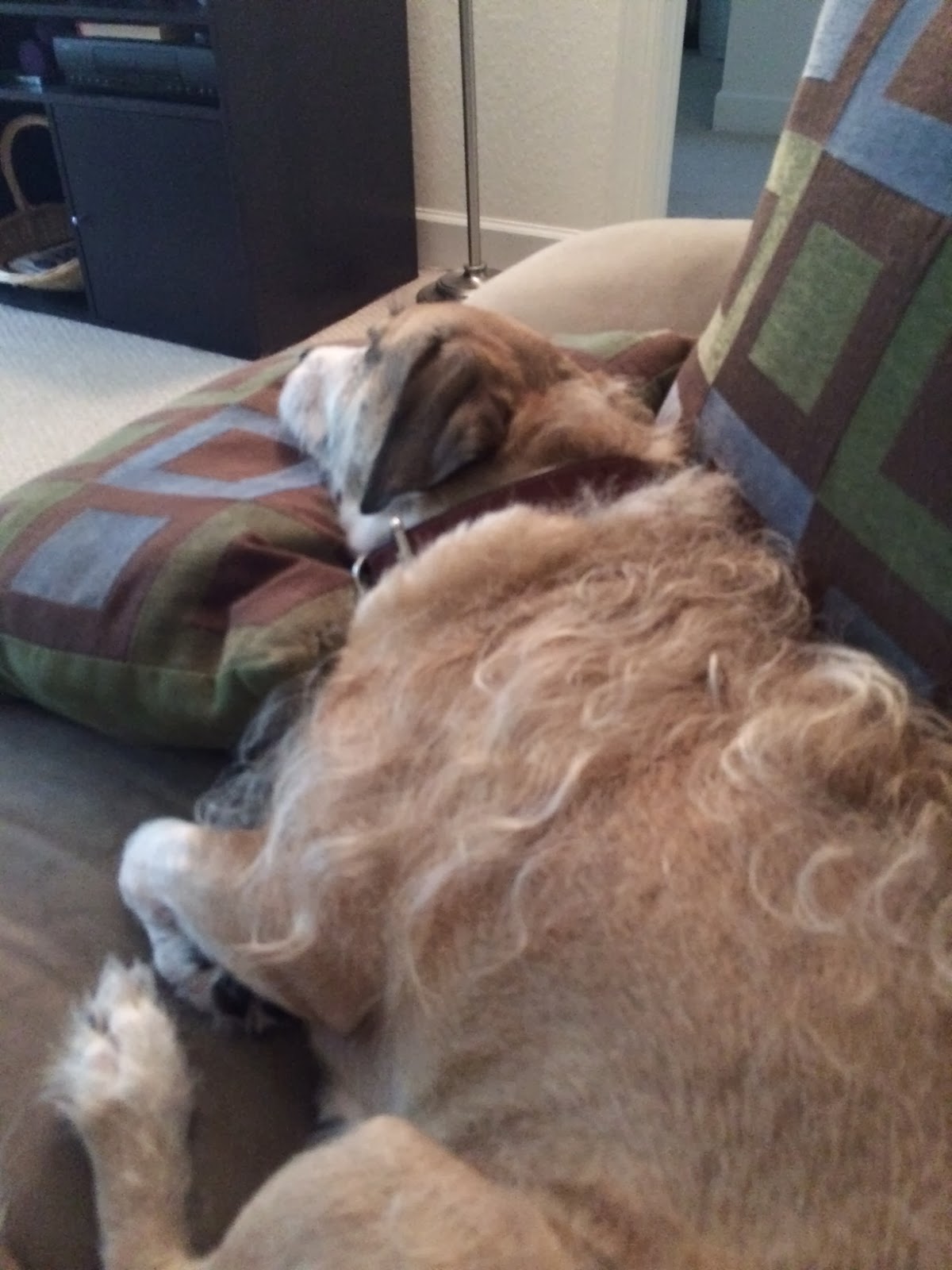 When I did finally venture to horseland, it was to a gray and rainy day.  That said I also arrived to an ecstatic Matt who had gone double clean on all of his horses.  If you’ve ever heard the saying “happy wife happy life” I would like to amend that to “winning trainer, happy horseshow.”  It doesn’t have quite the ring to it, but trust me it fits the bill.

Given my above preoccupation with work, all I had time to ride today was DC.
DC is an animal whose attitude is more driven by the weather than any other horse I’ve ever known.  Not just that, its relative weather.  Whenever there is a drop in temperature, he gets a wild hair and finds riding to be FUN, and EXCITING!!!  I, on the other hand, do not find the fun and excitement in this turn of events.  If you will remember, DC was the horse that quietly enjoyed his trail ride from barn to show grounds, who braved the scary flags and bridges and led Amigo through this “treacherous” terrain.  When the temperature dropped from 85 to 65 he went from this brave, calm soul to a horse that believed that danger was lurking in every palm tree, the bridge was just too much to handle, and the flapping flags were bound to eat him alive.

When we did make it to the show grounds, we made it into the facility approximately 10 steps when he spied a “No Parking Zone” sign.  Warning signals went up, snorting commenced, and he proceeded to go quickly backwards the entire 10 steps that we had previously accomplished.  “OH GOD WE CANNOT PARK HERE.”  A lovely young lady in a golf cart that was headed my direction had politely stopped to let me attempt to get past the death by parking sign drama.  After what seemed like an eternity, she called out to me “do you need a lead?”

Oh the dilemma.  On one hand I was making no progress in the battle of DC vs parking sign, on the other, admitting defeat and requiring a lead from a complete stranger set me up for embarrassing moment number one of the day.  In the end my pride was worth less than the desire to get to the ring, and the nice young woman not only led us past the death defying sign, but also fed DC a cookie, which may have convinced him he was not walking into the death trap he previously believed to be true.

We made our way past the barns, slowly and carefully, watching out for any additional no parking zones that might come up.  At which time we came across a small bay hunter being led to the rings.  DC decided that this must be his long lost herd and attached himself to the horse following behind him at a safe distance, and giving us the confidence to face the now terrifying show grounds.  The upside to this was he was finally walking like a normal relaxed beast.  The down side was that the horse was headed in the opposite direction I needed to go.  I chose the upside, so we followed him on the path that leads to the international warm up ring.

The international ring is where all the big time jumpers happen.  Immediately upon arriving at the end of the path, I realized my mistake.  The bay hunter was headed left, and I needed to go right.  To clarify, I needed to go right with my spookasaurus who really wanted to go left with his new found herd.  To clarify further, I needed to go right directly in front of all of the big time jumpers schooling for their big time class while I was atop a horse that when it is chilly, sometimes finds amusement in playfully humping his back in place thinking he’s looking super cute.  I do not agree with the cuteness of said behavior.  I said a little prayer that he would act like an adult for at least the 30 seconds it took to get past the warm up ring and proceeded on.  Somehow he took a deep breath relaxed his tense self, and decided it wasn’t all that bad after all.  Prayers answered.

We made it to ring 8, which was open for hacking, and started the process of focusing, relaxing, concentrating, and rounding.  After about 5 minutes or so, my normal DC returned in full form and giving me a lot of good work through his back and hind end.

About 10 minutes later, yet another beautiful gray walked in the ring, this time a hunter.  When that horse started to trot, I think my jaw dropped all the way to the ground.  I honestly didn’t even know a horse could move like that.  He made any “10” mover you’ve ever thought of look like an ugly hackney pony.  Watching this rider warm him up was a true testament to the type of talent I’ve seen here at WEF.  Riding that is so skilled I can honestly only ever hope to aspire to.  It was beautiful to watch.

For all of you hunter riders out there, I’ve seen a lot of pro riders work to make a horse push through their hind end, haunches in and out, lateral movement where the butt is working much more than the front end.  I’ve also seen A LOT of counter canter work.  Specifically riders cantering across the diagonal and purposefully holding the current lead, turning it into a counter canter around the end.

At the end of our hack, I took the opportunity to walk DC around on a loose rein quietly while watching some of the 3’3 pre-greens going on in the adjacent ring.  I saw some amazing riding and beautifully jumping horses.  The kind of horses that might accidentally hit their knee on their jaw they're jumping so amazing.  But I also saw some ordinary mistakes.  The previously mentioned beautiful gray had two swaps off the ground, I saw a rider run for the gap in a not so pretty way, and I saw a horse that didn’t actually jump a 10.  I must keep reminding myself on almost a minute by minute basis, that these are riders too.

After riding, I decided to hop on my bike and head over to the show grounds to purchase tickets for Hunter Hayes on Saturday night. 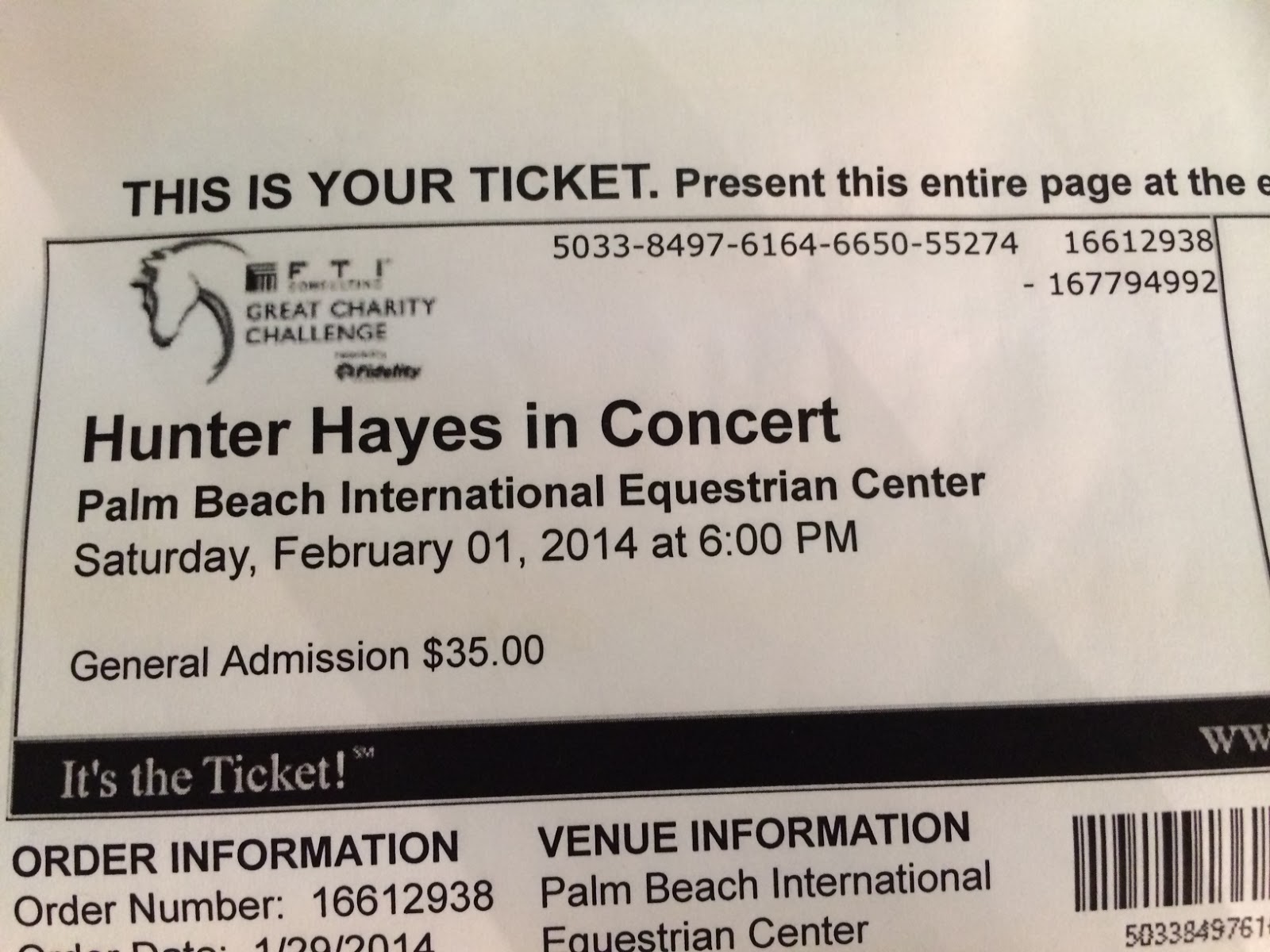 That’s right; Hunter Hayes is playing at the show grounds for the Saturday entertainment.  On my way there, I got a bit lost, but my… what a place to get lost in.  I accidentally found my way to Hickstead Place. 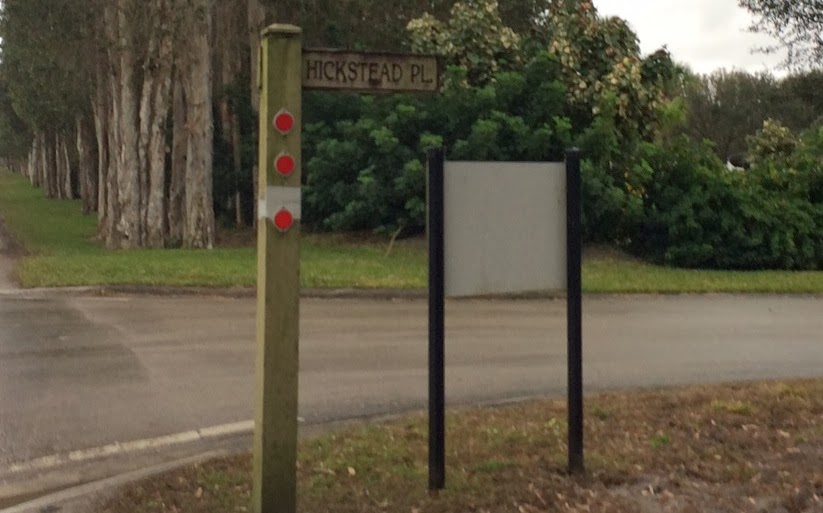 And although I didn’t get a picture of the barn, this is what one of their arenas looked like.  Even rainy and wet, it was beautiful. 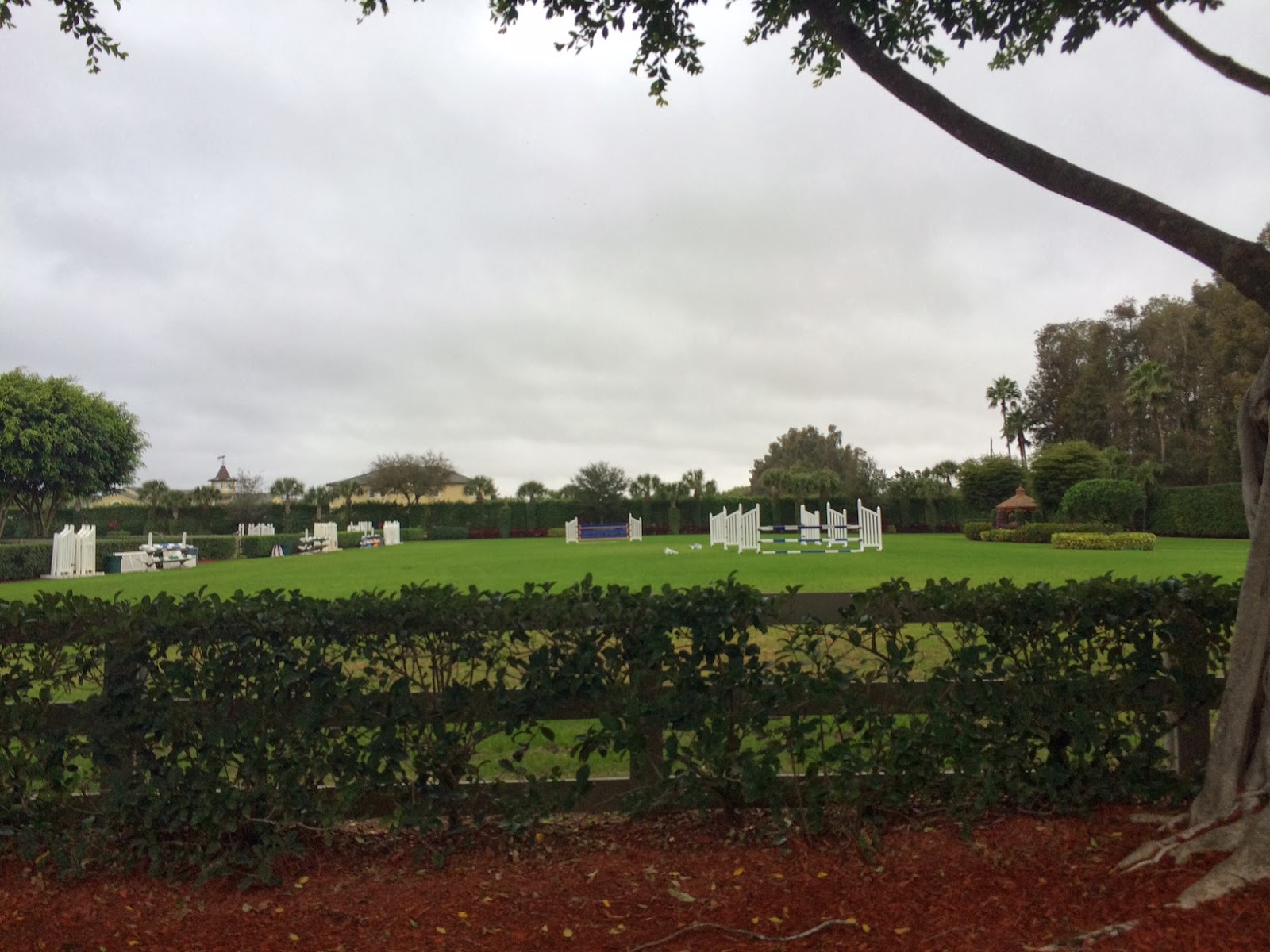 The other thing I came across while trying to find the show office was…. 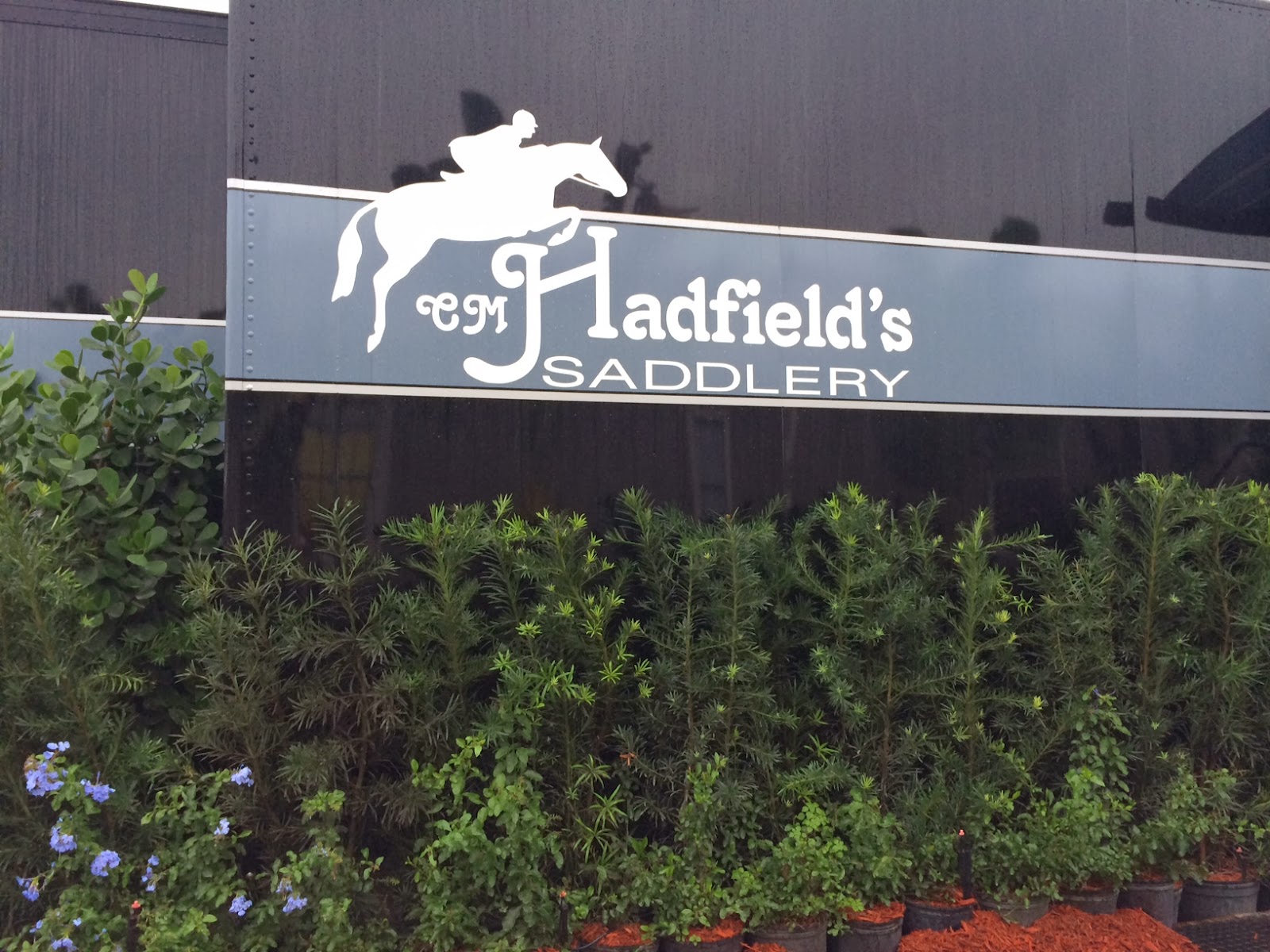 They were closed, so I did not go in, but now that I know where it is, pure danger.

Thankfully, since I did not bring my rain coat, Suzanne let me borrow hers.  In hindsight, I believe she may have regretted that decision. 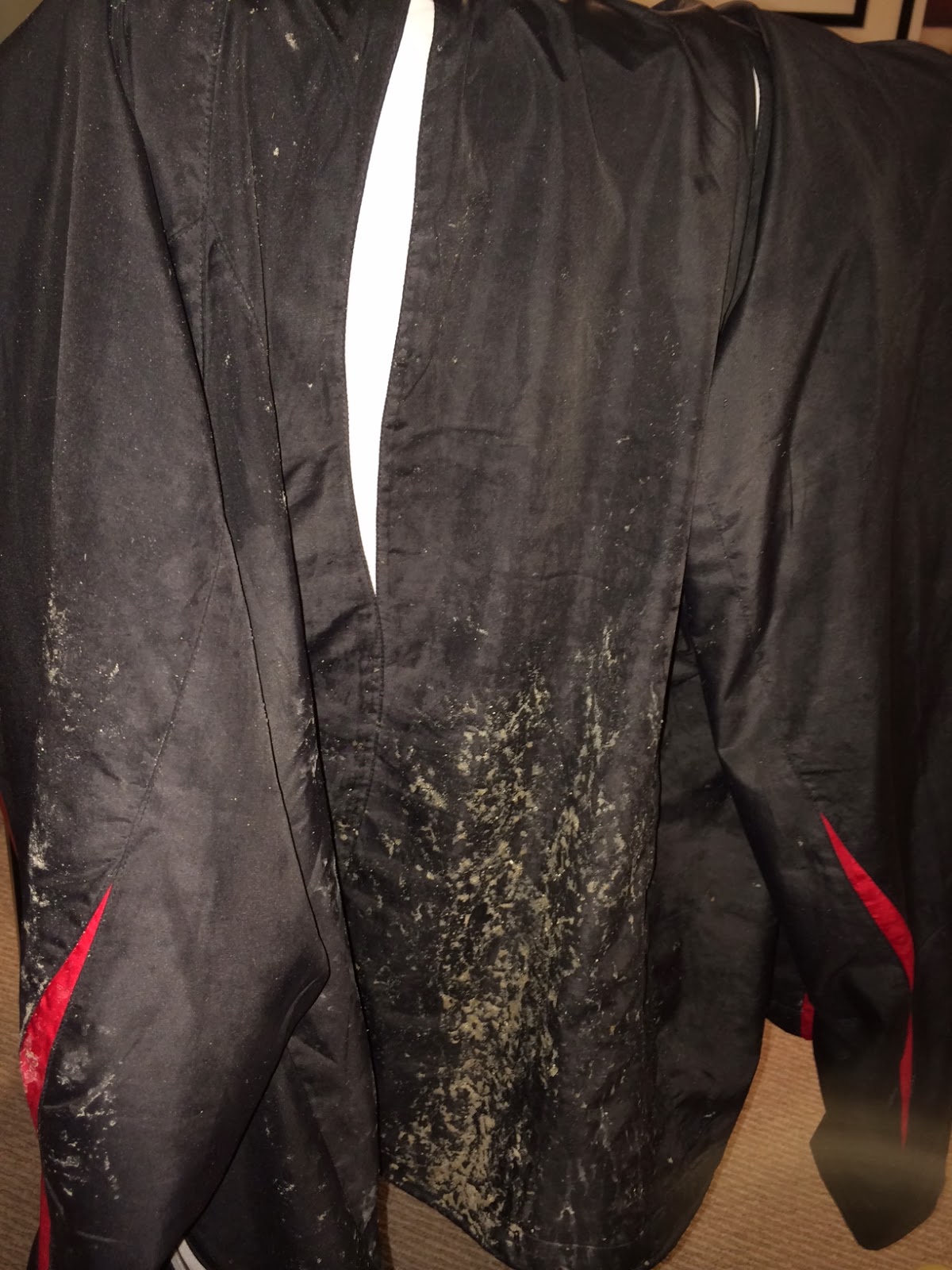 Bike riding in the wet sand is a dirty business.  Thus why only the grooms and I can be seen pedaling around.  Everyone else has a golf cart, typically custom in their barn colors, logo, and decked out to the max.  Maybe if I add a bell to my bike I'll feel like I fit in better.  Accessories are all the rage.
Posted by Anna at 7:10 AM