If you are a horse person (I’m guessing that if you’re reading this blog, the likelihood of the answer being ‘yes’ is particularly high), and you have been doing this for any period of time (let’s say longer than oh 5 days), then you have faced with a time when you question why. Why do you continue to push through the blood, sweat, and tears? Why do you pour your time, energy, commitment, and dollars (SO MANY DOLLARS) in to the love of the 4 legged? Why do you sacrifice so much for another day in the saddle? For me, at least, the answer is a moment in time with a horse like Caprivi.

On June 2, 2018, I posted an ISO ad on Facebook. Looking for yet another young horse to bring along. Something in the 4-6-year-old range, with a lot of talent, but not a lot of knowledge or training. Baby horses are really where my sweet spot lies in my riding ability, and what I enjoy the most. I received a lot (I mean 120+) responses, with many nice (and many uh, not so nice) horses, but there was a particular private message that intrigued me. A barn manager messaged me and said, “I have a horse at my place that really meets none of your criteria, however I think he’s a pretty nice guy, let me know if you want some video.” My interest was piqued. Nothing like telling me a horse is not what I’m looking for, not having any video, and then taking an entire week to send any footage to cement my interest.

The horse was a 9-year-old Trakehner gelding. Clearly attractive, clearly had talent, but was in need of body conditioning, some good time under saddle, and some love.

As happenstance would have it, he lived in Virginia Beach, and I was making a work trip just a few days later to D.C., so I made plans to make the quick jaunt over to the barn to see him in person. My quick jaunt became laughable as a 2.5 hour drive quickly turned to 5, and then closer to 6. Virginia traffic, you are no joke.

When I rode Caprivi for the first time, it felt a little like riding a train that had come off the tracks but was desperately trying to find its way back on. It felt to me like he had been given a lot of mixed signals, been through some rough riding, and he was incredibly defensive to ride. That said, there was something in there, something that whispered I should give him a chance, something that said he deserved the time and energy I had to give, something that told me he was to be mine.

I only had the pleasure of owning Caprivi for a few short months. Our story began at the summer shows in Colorado where I spent long hours with him trying to learn what he needed and stuffing his face with peppermints.


We had a moderately successful time at the show, but honestly our real story began when I got him back to Texas.

His entire way of going under saddle needed to be broken down and built back up from the ground up. His canter was unbalanced, his lead change was quirky, his grudges were deep. But underneath it all, was a current of trust we built together. He required a 50/50 partnership all the way. If you didn’t meet him halfway, it wasn’t happening. Actually, there were times if you didn’t meet him ALL the way, he just wouldn’t either. But the glimmers of greatness were there from the beginning.

Caprivi was a conundrum in so many ways. He had a huge stride where he could barely fit the step in on one line, but then add two in the next. He had the easiest and smoothest lead change in the world, but only when he didn’t think about it too hard. He was the loveliest horse to hack, but had 100 tricks up his sleeve to the jumps. He was beautiful; he was tricky; he was demanding, and he is one of my favorites I’ve ever owned.


On Monday, April 15th I headed to the barn on a beautiful spring day. We had had what was our best jumping school ever on the previous Saturday, ending with a short course of 3 flawless jumps and a perfect lead change. We were prepping for summer showing, and I was confident we would qualify for Zone championships, my goal for 2019. Mondays were hack days for C, and on this day I rode in the grass field focused on balance, transitions, and the dreaded counter canter. Our last ride together was frankly, one of our best. Caprivi hated the counter canter, but on this day, I can say he (finally, finally) figured it out. We ended with a lovely left-lead counter canter around the big oak, followed by a short trail ride down to the creek.

As I was changing clothes in the bathroom, two of the guys that work at the barn, came pounding on the door, telling me there was a problem with one of my horses and I needed to come now, right now.  I threw my clothes on and ran to his stall. About 100 things were running through my head as what could possibly be the problem. I literally had fed him a treat and walked away from his stall no more than 5 minutes previously.

Horses, being horses, can find unique ways to get themselves in to all kinds of danger, but this did not look good. When rolling, he had managed to get a leg caught, and hang himself upside down in his stall. Things quickly went from bad to worse as he managed to pull a grate of bars off the wall with his leg trapped between. What transpired over the next 20 minutes is nothing I wish on anyone. But I can say affirmatively that as the entire crew at the barn worked to save him, I was glad I was there with them, and no one else.

Caprivi had done significant damage to both of his back legs, the left one taking the brunt of the blows from the bars. He was bleeding badly, non-weight bearing, and in a lot of pain. I knew immediately that he had to go in, and I knew that if there was one place that could save his leg, it would be Texas Equine Hospital. As I made the 2-hour drive to Bryan, all I could think was the pain he was in, how scared he was to get in the trailer, and how we went from a beautiful morning hack to a life-threatening injury in a matter of seconds.

Upon arrival, his prognosis was guarded. Based on initial assessment, he had severed 25% of his Achilles tendon, and Dr. Honnas warned me that an injury like this could go one way or the other. As they worked on his leg, his entire body shook, and shook, and shook. The amount of shock and pain that he was in cannot be understated. About 3 hours in to his treatment, as I was rubbing his head above his eyes just like he likes he finally looked at me and took a deep breath. He put his head in my arms and closed his eyes. I like to think he knew we were trying to help, and we would do all we could to save him.

Over the next 5 days, Caprivi did everything right. He was a perfect patient and was improving every 12 hours just as he needed to. On Friday morning I got texts from both of his vets that they were thrilled with his progress, and that he was doing excellent. By Friday afternoon, it was unfortunately a different story. He had suddenly lost stability in the leg and was quickly losing normal function of the gait. They wanted to give him 24 hours to see what would happen, but the early good prognosis had vanished.

As I headed to the clinic on Saturday, it was with a lot of trepidation. I didn’t want to lose my horse, but I didn’t want him to suffer needlessly either. It’s impossible to know what the right decision is in these kinds of situations, and I hoped that Caprivi was that slim chance of a miracle. Unfortunately, when I arrived no miracle had occurred. His leg had degraded since the previous day, and in the end, there was really no choice to be made. I spent the afternoon sitting quietly with him, stuffing his face with carrots, peppermints, and as much time grazing as he could handle. Twice he quietly let me know he needed to head back to his stall for a rest. It wasn’t easy for him to maneuver, but I think he enjoyed the time in the sunshine.


For those of you medically inclined, the necropsy showed that Caprivi suffered from a complete rupture of the medial tendon of the gastrocnemius and about 50% rupture of the superficial flexor tendon. It is of course impossible to say what happened between Friday morning and Friday afternoon, but the best theory is that he had a partial tear of the gastrocnemius that was not detected with the original injury given where it was torn. As he began to place more weight on the leg, what was left of that tendon gave way, leading to the significant instability and sinking of his hock.

Some would say I’ve had a run of bad luck with horses, but I disagree. I would say horses are a part of my life, my soul, and my being. And they are quite simply tragedies waiting to happen. Although our time together was not long, I became Caprivi’s person. He needed someone to trust, someone to believe in him, and someone to give him confidence. In the end, I hope I did that for him, and I hope he knows how hard we tried to save his life. To say I will miss him is an understatement of no measure, but I will. I will miss the partnership, the trust, and finding the keys to unlock the puzzle of his potential. I will miss his kind nature, thoughtful patience, and willingness. I will miss my friend.

There are a few people that have helped me through this terrible week, that deserve much thanks. Miguel, Lallo, and Enorio, for their incredible horsemanship and working together as a team to get him out of the emergent situation. Kalli, for her ability to help me think through situations infinitum, kindness, and long support. Stephen, for his steadfast support, which I have to say, I manage to push to every limit possible. All of my dear friends that have kept my phone lit up with checking in, you guys are amazing. Dr. Honnas for his ever-enduring patience, knowledge, and expertise. And a special special thanks to Dr. Alvaraz who answered every text, every question, sent me photos, videos, fed him treats, took him on walks, and in the end was there with him to say goodbye when I couldn’t be. 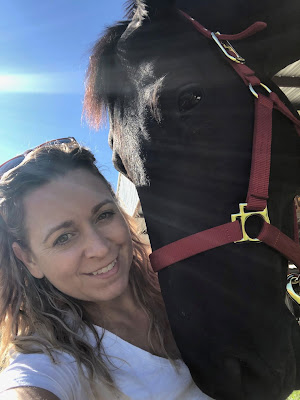